Winning your first freelance job on vWorker: how I got started

When I have mentioned in passing that I used to earn a decent living from freelancing on vWorker (formerly RentACoder), I’m often asked two questions: how did you get started; and how much did you earn? Let me begin with the first question:

To give a little bit of the backstory: I moved to Poland in October 2009, nearly ten months after first meeting the fantastic lady who, two weeks from now, will become my wife. Before this, I had only worked at startups, and in truth I was looking forward to not working for, oh, a good two or three weeks. This would be the longest break I’d ever taken since beginning my working life 12 years earlier.

So, I sat around for a few weeks, reading books, getting distracted by shiny things, and eating lots of cake. From time to time I sent out my CV (or resume – any other terms used in English-speaking countries?), and each day I grew less and less interested in the whole sorry process after not receiving even a single “Thanks… but no thanks” email.

At this time, I was fortunate enough to remember a conversation that I’d had with a friend several years earlier. He had been describing his experiences of outsourcing via RentACoder. Thinking about it, I thought “I can code… I should give this a try!”

First things first, I needed to register on the site. Simple enough, start off here and fill in all the fields. Being lazy, I chose to do the least amount of work possible and copied-and-pasted from my CV in its entirety. Next, I uploaded a photo where I’m looking particularly smug, and there I was, job done!

If you’re playing along at home, at this point I’d recommend sitting down with a glass of beer or wine, as let’s face it – if you need to send an important email, it’s much better if you don’t have any pesky reservations holding you back and preventing you from writing what you *really* need to say.

I quickly realised that there was one small problem with my plan: right now, my vWorker history was blank; I was an unknown quantity, and I would need at least one highly-rated job before I could start bidding on more lucrative bids.

Looking through the various adverts for jobs, I read one with the title “Simple PHP script to request data from API and display result.” That sounded good to me, time to take a look at what was being requested:

“I would like to develop a simple tool that will make use of a recently released feature of Facebook’s API.

The tool will just have just one page (the homepage). It will feature just one simple input field (text). The user will enter in a URL into this box.

AJAX will then kick in and process the URL via the API. Below the URL field, we will then show 4 pieces of data (preferably shown in individual boxes) that comes out from the API call.

API details can be found here:

User can clear the data, or enter in a new URL to kick start the API call again.

This is a really simple task for someone who knows what they are doing, so I expect bids to reflect this simplicity.

The tool may be developed further in the future, so this could be an amazing opportunity to be involved in something from the very beginning.

Please post in your bid that you understand the task, have confirmed that you’re up for the task (ie. have checked Facebook’s API documentation), and it’d be great also if you could post an example of something similar.”

Excellent, that looks like the kind of job I can do! But what price should I quote? I didn’t want to go in too low and offer to work for a dollar… but something like $20, it’s not too small, and it should be a good starting bid. This leaves one final question: how I can guarantee my bid will be the winning bid?

There are few guarantees in life, but there are certainly a few tricks one can use to try and move the odds in one’s favour. With this project, I decided to sit down immediately, right this very second, and code up a proof-of-concept, something that would prove beyond all doubt that I was capable of completing the job. For all I knew, time could be of the essence, and I was determined to start my new career as soon as possible.

I sat down, coded, and some time later I had an ugly but functional proof-of-concept available. Wasting no time, I sent my initial email:

I’m rather new to this site, and hoping to prove myself and my abilities rather quickly. It’d be great to work with you further on this, as I have knowledge of AJAX, Javascript and PHP, and tying them in with Facebook shouldn’t be too tricky.

I’ve quickly knocked up a proof-of-concept here: [URL that no longer works]

Enter a url, click on the “Do Magic” button, and the call is made to Facebook and the raw data results displayed on the page. Obvious this can be made to look a lot prettier, but I hope it’s the genesis of what you had in mind.

Looking forward to hearing from you,

“The genesis of what you had in mind?” Ok, maybe having that drink wasn’t such a great idea. I sat down and waited. A day later, the bid was awarded to me, and after I’d made a few tweaks, my first piece of work had been accepted.

The client, Keith, has kindly agreed to work with me on this blog post, and here’s what he wrote back to me after accepting my work:

“Thanks so much for the work you have done. The tool is pretty much 100% as to what I had envisaged. The code looks super clean and light-weight. You really did a great job with the design also, I appreciate I didn’t give too much instruction as to what I was looking for, but this really nailed it.”

“I’m always looking for developers to work on an array of projects, some pretty large scale. Do you have a portfolio of work that I might be able to look at?”

Not only did I now have my first piece of positive feedback, I had proven myself to a client who had lots of other work. I’d call that a success!

I asked Keith about the other bids he’d received on the project, and if he had any notes he could share. Here screenshot of a few of his notes under some of the original bids (my vWorker username is mootothemax): 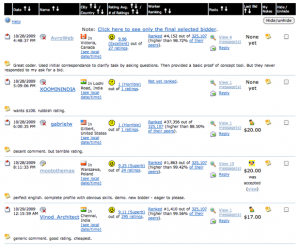 Regarding my bid, Keith said “[it] was the clear winner for the reasons I note. The demo was a killer – proved you knew what I was after, can be assumed to be quick, provided a competitive edge and so on. The other great part was your rationale that you were new to the site and were willing to take on a task at a reduced rate in order to build feedback/credibility – or at least that’s what I implied. It seems risky, but it can certainly pay off – you were great to work with and I was happy to give you a bigger project.”

The idea to write a proof-of-concept turned out to be a fantastic tool, and it’s a technique I used whenever possible. Keith has a couple of tips about this technique:

“A tip I’d give other coders using this method would be to leave a quick message telling the employer that you’re working on a demo and to ask them to wait until you’ve provided it to them before selecting a bid – this should help you against the risk that another bid is selected before you’ve had a chance to complete your demo.

For tasks where a demo isn’t so possible, then bidders have got to provider relevant portfolio items.”

I also asked Keith about other bidders in general. Are there, for example, a lot of spammers, or are the majority serious bidders?

“I don’t see much spam as such. You always get a bunch of generic responses that have been copied and pasted for a bunch of jobs “I am from such and such, have these skills, and can do the job for you”. Sometimes they have bad English and don’t reference the project at all. Some copy the projects title, which is still lame. Better ones reiterate the brief. I’d say all the bids are fairly serious, but certainly different levels of selling going on. Around a quarter of initial responses don’t have a bid attached to them – that’s fine if they want to ask for clarification, but if they give a generic responses without a bid, then I just know they’re going to be relatively painful to work with.”

And what about warning signs? Are there many things a bidder can do to put off a potential client?

“Terrible English puts me off. It’s shameful to say it, but it really does matter to be able to have clear communication. Terrible ratings are an obvious flag also. Digging into their feedback can be helpful in revealing whether or they work on decent projects or have just built high feedback doing little things (ala a common eBay scam).”

Keith has some further tips from an employer’s perspective, and I recommend that you have a read.

So there we have it, the first bid won – admittedly for a small project, but it’s a start. From there, I didn’t run into any major problems building up a decent work history. My first project with Keith led to lots of work on one of his major projects, and 18 months later I still stay in regular contact with him. If freelancing interests you, give it a try; the first project you try shouldn’t take longer than a few hours an evening, and you could be surprised at how quickly you pick up clients who want ever-more work from you

Huge thanks to Keith for his help with this blog post.

Are you looking for web development or just someone who will work with your business needs and not against them? Get in touch with me here, or take a look at my consultancy’s website: Moo Unlimited. I’m confident I can help you.